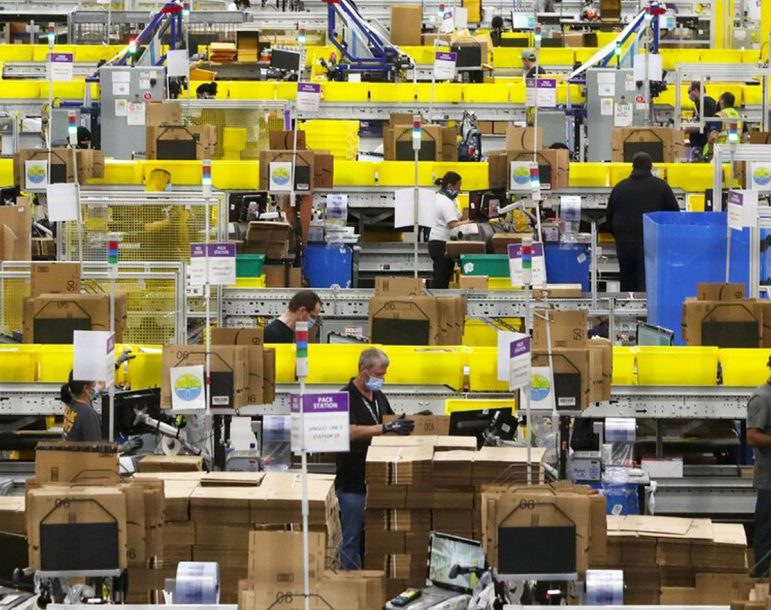 Amazon’s robot warehouses are a triumph in terms of productivity. The presence of automatons carrying out the most repetitive tasks is also supposed to help reduce the risk of accidents, but an internal company report points out exactly the opposite.

Since 2014, Amazon has been showing the efficiency and safety of its logistics centers where robots assist human workers in processing packages. But it turns out that this has turned against them when Reveal magazine published that between 2016 and 2019 the ratio of employees with serious accidents was 50% higher in warehouses where the company had robots than in those where it did not.

Also, the Center for Investigative Reporting in the United States has had access to a document from the company on workplace accidents in its warehouses. The report’s findings are worrying. In 2019, Amazon warehouses registered more than 19,000 serious work-related accidents (meaning serious accidents that result in a loss of several days). This means that there are 7.7 accidents for every 100 workers per year. It is an average of one third higher than in 2016, and almost double the accident ratio of the rest of the companies in the distribution sector.

The curious thing about the matter is that the report points to the automation of work as a factor that aggravates the accident rate, something that in principle we had been told was just the other way around. According to data from the Center for Investigative Reporting, automated warehouses have an average workplace accident rate 50% higher than that of traditional distribution centers.

These automated centers are among the highest of any of all Amazon warehouses. Last year, for example, downtown Seattle had 22 serious injuries for every 100 workers, a staggering number. Also, the Dupont warehouse, one of the most automated, shows an accident rate of 22 cases per 100 workers. It is almost five times more than the industry average.

The problem with these accidents is that the workers of these centers are expected to do more than workers at normal centers. While a normal worker has a figure of 100 products every hour, those of robotic centers have 400, a figure that stresses workers and leads them to end up suffering injuries.

Amazon robots aren’t exactly humanoid. The most common are a fleet of “Roombas” that are in charge of moving the shelves with packages from one side to another to bring the items to be shipped to the workers. The hectic activity of these small transporters has quadrupled productivity, but apparently it has also introduced new types of injuries that have nothing to do with robots colliding with human employees, but with bad posture and wear due to how robots have changed (for the worse) the tasks that humans perform.

Instead of walking every so often to find more items, workers now spend shifts of up to 10 hours standing in the same place wrapping packages and performing repetitive muscle tasks that robots cannot do for them. To make matters worse, the spectacular efficiency of robots bringing items forces workers to wrap up faster. The result is a dramatic spike in muscle and bone injuries. It seems that not everything is joyous in a future where robots were going to save us from the worst jobs. Amazon has not commented on the report and has limited itself to issuing a statement in which they assure that “the use of robots, automation and technology in our distribution centers is improving the workspace and making tasks safer and more efficient.”

Amazon has been warned of this situation by the safety officials of OSHA (Occupational Safety and Health Administration) but they have not made any safety changes, and they have failed to provide a workplace free from serious recognized hazards.   Amazon has also not complied with standards, rules and regulations issued under the OSH Act (the Occupational Safety and Health Act) to make sure they conform to applicable OSHA standards.

Have you been injured in an Amazon warehouse?

It is our goal to help you resolve your personal injury case efficiently and effectively. We will negotiate extensively with insurers and other parties involved to reach a settlement that provides you with fair compensation. Should you have questions about the terms, or anything related to the offer in your case, we will make sure that you have an ample opportunity to discuss any concerns with our team.

While we believe strongly in our negotiation skills, sometimes the other side is going to dig in and want to fight. If that happens, you have an experienced team working for you. We have handled a number of complex warehouse accidents in Texas and around the nation. Our attorneys are skilled litigators, and we will not hesitate to go to court if it is the only way to get you fair compensation.

At PMR Law, our attorneys have experience handling warehouse accident claims in Houston and the surrounding region. We can help you regardless of the type or severity of the injury. Reach out online or by phone to speak with a Houston uninsured and underinsured motorist attorney.

If you need legal representation for an uninsured or underinsured motorist accident lawsuit, we are here to help. Get in touch online or by phone to speak with a Texas personal injury attorney. We represent injury victims throughout Texas.

Contact our auto accident lawyers at 832-667-7700. Get in touch with us immediately so we can evaluate your case for free. We are available 24 hours a day, 7 days a week. You can also fill out a form by clicking here.