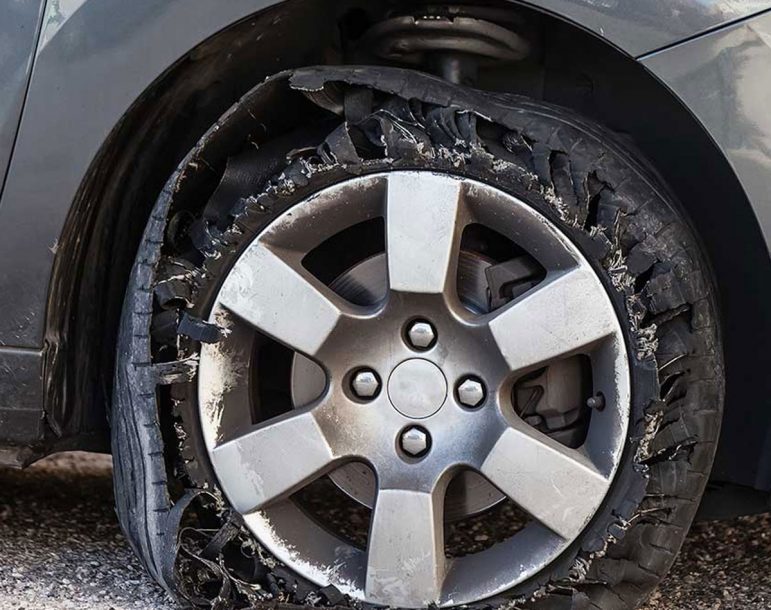 We trust that the tires in our cars will get us safely to our destination. Unfortunately, tires cause hundreds of serious injuries and deaths every year as reported by the National Highway Traffic Safety Administration (NHTSA). Many drivers have been victims of accidents that could have been avoided. Many of these accidents also result in fatal consequences, leaving families devastated and with significant emotional and financial losses.

Usually, these incidents occur when the tire band separates, causing a very sudden puncture. Punctures can cause serious car accidents because they cause the driver to lose control of the vehicle. In larger cars, such as SUVs, trucks, and vans, a puncture can also cause the vehicle to overturn.

The separation of the tire bands is often caused by a poor grip. In many tires that have failed in recent years, experts found that the steel belt and rubber components of the tire are not properly attached during the manufacturing process. This defect in the tires causes many accidents every year. In addition to poor bonding, other defects may occur during manufacturing. The poor quality of the tire materials, bad setting processes, improper assembly of the tire, and other problems during manufacturing can lead to defects that cause car accidents.

In recent years, several mass recalls of defective tires have been issued, which has caused driver confusion, frustration, and panic. These massive recalls of tires have affected some of the main tire brands.

Reasons for the Mass Recall of Defective Tires.

The main reason for the emergence of massive recalls of defective tires is known as “tread separation”. The problem occurs when the tread comes off the steel belt that reinforces the tire, as mentioned previously. Most tires have a nylon layer located between the steel belts and the rubber band, which allows the band to remain attached to the tire. In some of the tires that are included in the list of the massive recall of defective tires, the manufacturers omitted to place the layer of nylon to save on costs. The absence of this layer causes the adhesive located on the inside to deteriorate.

Injuries related to the Mass Recall of Defective Tires.

According to the NHTSA, 738 people were killed in 2017 in motor-vehicle accidents that were caused by tire failure, which includes blowouts, tread separation, bald tires or under inflation.

Response to Requests for Massive Recalls for Defective Tires.

An investigation by ABC News regarding defective tires revealed that several drivers had not received information about the massive recall of defective tires. The reporters in charge of the investigation also discovered, unlike the recent mass recalls made by car manufacturers, that the NHTSA does not have a public database for users to find out if their tires are on the recall list.

The report also revealed that several of the manufacturers of defective tires have not issued a list of defective tire brands to alert drivers about possible risks surrounding their products.

Lawsuits related to the Mass Recall of Defective Tires.

Other tire manufacturers also face legal action from drivers and their families. This type of lawsuit could be an effective means to obtain compensation for medical expenses, funeral expenses, loss of income and other damages of an economic nature, in addition to pain and suffering, as well as punitive damages.

Brands included in the List of Massive Defective Tire Recall.

At some point in time, almost all brands have issued a massive recall for defective tires or manufactured tires that have dangerous defects. Most of these tires were manufactured in China.  Drivers can look for the “Made in China” legend located on their tires and contact the manufacturer for more information.

Sometimes the age of the tire causes defects. Some retailers or manufacturers store tires for years before selling them to customers. Since some components become ineffective after a while, this means that customers are sold tires that have already passed their expiration time. These tires can pose a real danger.

In addition to product defects and aging, tires can pose a risk when they are not installed or mounted correctly. Negligence can mean that the tires are not rotated or aligned correctly.

Personal injury attorneys in Texas have successfully handled many tire defect cases. Our team of attorneys can help you try and recover fair compensation. Many people, who have been in a car accident that involves a defective tire, hesitate to call a lawyer on personal injury issues in Houston because they assume they don’t need a lawyer if they have insurance. Some people also assume that a lawyer will be too expensive. These ideas could result in costly mistakes.

Tire insurers and manufacturers are not willing to pay a fair amount in each accident case. Some victims have discovered that their insurer will only pay a portion of the necessary medical treatments after a car accident. Many manufacturers continue to insist that consumers are responsible for tire punctures due to improper maintenance of the tire.

These findings are even more important when tire defects contribute to the puncture. Although many tire manufacturers have reported failures, and even though lawyers have found that manufacturers have often known about tire defects for some time, information about these possible fatal imperfections has not always been shared with consumers.

If you have been in a car accident in Houston, or other parts of Texas, you should consider have an attorney on your side. The Houston personal injury lawyers at PMR Law can help you find out the reasons behind a tire failure and can try and get you the maximum compensation you are entitled to by law.

Contact our motor vehicle accident lawyers at 832-481-3427. Get in touch with us immediately so we can evaluate your case for free. We are available 24 hours a day, 7 days a week. You can also fill out a form by clicking here.

PMR Law is a proud member of the Multi-Million Dollar Advocate Forum.